Published by Benjamin Suulola on February 14, 2017

You were born to win, overcome and live in victory.  But you must understand what it takes.

Anointing make Champions. The Psalmist wrote, “He teaches my hand to war, so that a bow of steel is broken by mine arms” (Psalm 18:34).

When God anoints you for conquest, what frightens others get you excited.

Fear is a normal response when there is a sudden confrontation of a threatening circumstance perceived to be more powerful than we are. This was the situation that confronted the Israelites during the leadership period of King Saul.

The Bible says, there was a giant who had challenged the people of Israel for forty days, calling them to a fight and defying their armies. Now when Saul and all Israel heard those words of the Philistine, they were dismayed and greatly afraid (1 Samuel 17:1-11).

But something happened which will be my focus in this post, right in the midst of that great and terrible fear, a teenage boy called David suddenly appeared, on an errand by his father to look after the well being of his elder brothers who were among the soldiers paralyzed by fear.

He heard that giant uttered those threatening words once more and all the men of Israel when they saw the giant fled from him and were terribly afraid. But David was not moved. He saw the fear of others as his own opportunity to bring glory to God of Israel.

Therefore, David said to the fearful leader, “Let no man’s heart fail because of him; your servant will go and fight with this philistine.” (1 Samuel 17:23-24, 32)

Now the question is what gave David who was not old enough to be enlisted among the armies of Israel great audacity to make such suicidal attempt while trained soldiers who among them were his own elder brothers cringed with fear?

Anointing for conquest is powerful than armies that are trained and equipped for battle.

Anointing for conquest is supernatural.

“For the weapons of our warfare are not carnal, but mighty through God to the pulling down of strong holds” – 2 Corinthians 10:4

The anointing that came upon David in 1 Samuel 16:13 gave David supernatural ability for conquest. He first tested the anointing on lions and bears while he was tending his Father’s sheep in the wilderness. He also tested it on the demon of insanity tormenting the ex-anointed king Saul, yet he won. By these victories, David knew he was not an ordinary teenager. He knew God has anointed him for conquest.

I believe every leader needs the anointing for conquest. Though, every believer in Christ Jesus has been anointed for conquest through the Holy Spirit.

We are not ordinary people. The Spirit-filled believer is not an ordinary believer. He or she has been anointed for conquest. We have been anointed by The Lord to bring down the giant oppressing the people of our generation.

We must get excited with the same situation that gets others anxious. By the anointing of conquest, we are expected to confront battles whether people are present or not. We are not meant to run away or be afraid of the challenges confronting the people God has placed where He sends us.

God wants us to rise up and take our place as the one raised by God in a time such as this. I strongly believe there’s no better time that now that the families, organizations and nations of the world need leaders who will rise up because they believe they have been anointed for conquest.

May I say to you reading this, stop waiting for help to arise for your people, family, community, organization and nation from another place. You have to stop thinking that you are no match for the battle confronting the people where you are.

It is true that if you hold your peace at this time, help will arise for God’s people from another place, but you would lose your relevance. You would jeopardize and forfeit the purpose for which God has raised you to emerge in your generation for such a time like this.

God is expecting you to stand. Having done all, to stand. Stand tall to what is staring at your face. Stand tall to confront that lion and Goliath issues in your environment. Activate the anointing for conquest upon your life. Christ is your royal banner. He came to the earth, saw the plight of humanity and conquered for us.

Likewise, you have been sent into that office, school, community, church and position to make a difference for God. You need to be like David who believed there was a cause for him to fight. He knew the anointing was given for a purpose – to stand for God in his generation, to defend the integrity and the righteousness of God. David was not looking for personal fame. His goal is to bring glory to God.

Do you have the same goal? Then you can be rest assured that you will fulfill your purpose because God will anoint you full with conquest. He will teach your hand to war. You may not need to be skilled like others, armed like others and look great in stature like others, yet God will use you to win mighty and great battles for His glory.

There is something that always make me tremble before the Lord in prayer about leadership.

It is what to offer those who look to the Lord for spiritual direction, help and guidance through my ministry.

One of the fearful things about leadership, especially spiritual leadership is the fact that many lives are attached to a leader.

Sometimes when I feel overwhelmed and would have loved to put off the writing of this Journey of Leadership Devotional, the Lord would remind me of those who feeds on Him through the instructions here.

There are those who uses this devotional daily for their personal and family devotions. I have received requests from Church Leaders for permissions to use this devotional as equipping material for the Christian Workers under them.

There are organizations and individuals that glean from the instructions of the Lord through this devotional always.

Please note that I’m not saying this to boast of anything concerning the wide engagement of this devotional. Whatever comes from this devotional is not of me.

Why I have to say all these is simply to let you understand one of the reasons for my fear about serving God’s purpose as a leader.

It is not something that can be carried on or sustained by seeking natural information, copying books written by others or just depending on what your head can supply you.

It has to be a product of a Living Water of the Spirit that Flows within you.

This is how to remain a leader who can continue to be a channel of blessing on behalf of Christ to those you have been called to lead.

The truth I always tell myself is this: I have nothing of value to offer anyone except when the Living Water in me Flows!

The Living Water must take control over me.

He must flow that I may POUR out the Water, which is the Spirit of holiness, healing, refreshing, help, guidance, encouragement, anointing and the light that will glorify Christ in our generation.

So my groaning in prayer is always, LORD, Let Your Living Water Flow through me.

Every time I need to climb the pulpit to bring God again to His people, I always cry to Him that He must let the Holy Spirit, His Living Water to Flow.

Sometimes when I see divers kind of arrogance and demonstration of self sufficient attitude among ministers of God, I always mourn in my heart.

I mourn because revival will continue to tarry until we all come, arrive and submit to God in helpless brokenness for His Living Water to flow through us to the people.

Let me say something to those who have heard the call of God but still remain inactive or fearful because they feel they are not sufficient.

Please maintain that posture of heart before the Lord forever. But don’t stay inactive. Just cry for His Living Water to flow through you. Ask the Holy Ghost to take over. He is ready to flow through every BROKEN VESSEL.

The Living Water will Flow through you!

# QuoteForLeaders
“One of the fearful things about leadership, especially spiritual leadership is the fact that many lives are attached to a leader.” 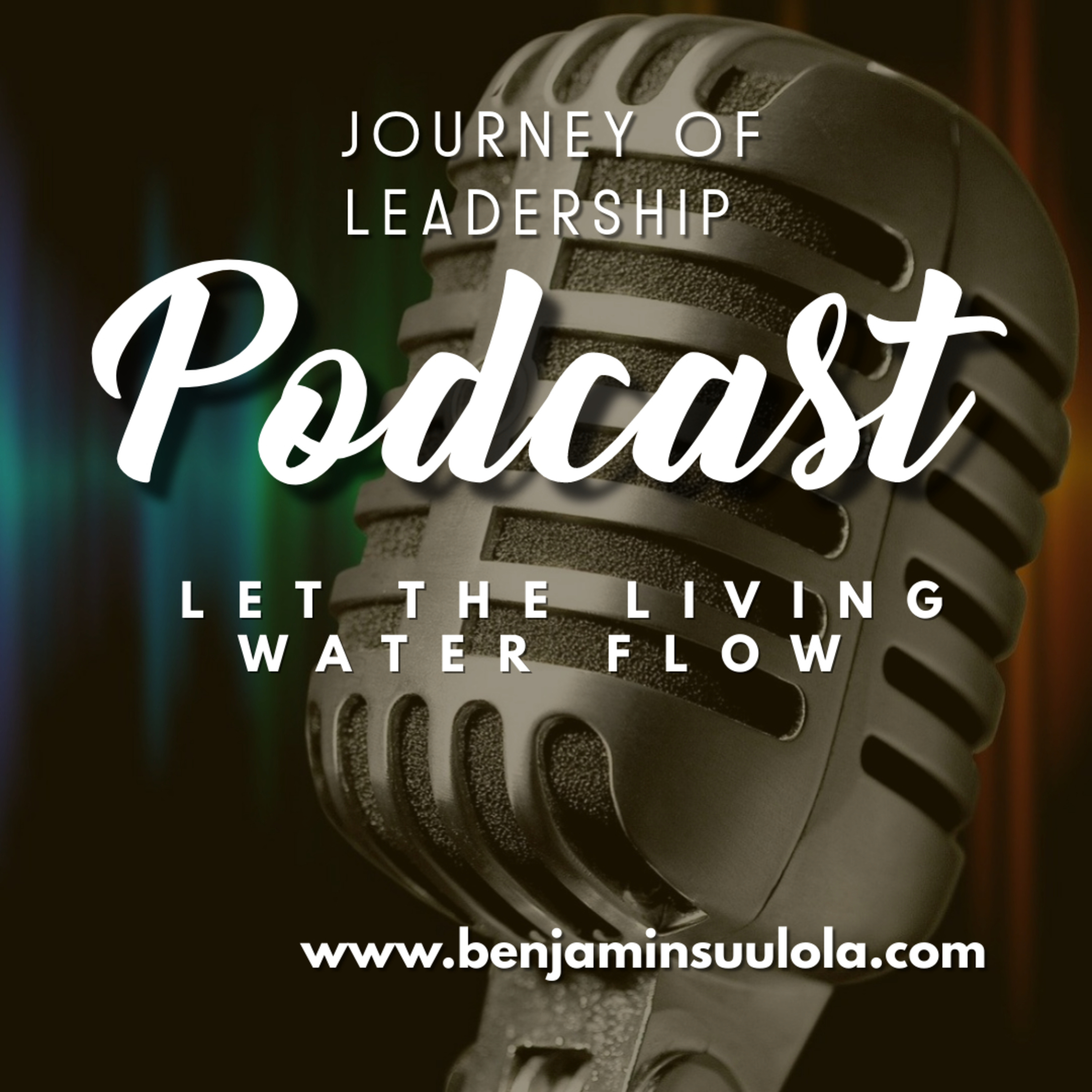 Power of the Anointing

God wants us to be strong believers who walk in His light always. And to fully walk in the light of Christ, we need to abide in the anointing. The power of anointing was demonstrated Read more…

The Power of Prophetic Warfare

As God’s children, we need to come to a point that we ask this question: What are the things that God purposed to do in my life that has not been done?  God has certain things Read more…

Leading Self – May 9 – Journey of Leadership Daily Devotion

Self Leadership is the most difficult leadership.